I skipped writing a favorites post for September because I didn’t have many things to talk about, but I found myself having to cut some stuff out to keep the post from getting too long (oops). So here’s a compilation of favorites from the past two months.

I know, I know — I’m late on the bandwagon. I just started watching a couple months ago and finally finished Season 2 a week ago and I’m hooked. The show’s writing and actors’ delivery make it so that it seems as if it’s not scripted, making it easy to watch and relate to. There are time when the main character, Dev, gets into outlandish situations as a 30-year-old actor in New York that I would never find myself in, but there are also times when Dev and his friends have conversations I’d have with my own friends, and that’s part of the charm of the show. If you’re like me and put off watching Master of None this long, go ahead and binge watch it on Netflix. You won’t regret it.

Late on this one as well. Kevin and I just finished the first season a couple weeks ago. We’d put off watching it, thinking it was overhyped, but once we started watching, we realized why everyone was so obsessed. We haven’t gotten around to Season 2 yet, but if it’s anything like Season 1, we’re sure to love it.

This series is currently in the middle of its first season, but, solely based on the first few episodes, it’s a hit. It’s based on a doctor on the autistic spectrum who analyzes medical situations in inventive ways that other doctors aren’t as readily able to. He saves people’s lives because of this, yet he struggles to convince other doctors as well as patients of his competency due to his condition. There’s of course some heavy content, depicting patients in life or death situations and all, but there’s also cheesiness and humor to cut the tension. Most importantly, this show provides a three-dimensional representation of a person on the spectrum as well as addresses the ableism in the work force. Plus, both my parents are doctors, so it’s nice to watch this with them and hear their stories about their time during residency.

If you’re a fan of Grey’s Anatomy or any type of medical drama show, I highly recommend checking out The Good Doctor.

4. The Sun and Her Flowers by Rupi Kaur

Rupi Kaur’s first book, Milk and Honey, is so beloved that I wondered if she’d be able to produce another book just as good. To my surprise, The Sun and Her Flowers is such a beautiful book that, in my opinion, undoubtedly surpasses her first.

To be honest, I couldn’t really relate to the first two chapters of the book, “wilting” and “falling,” which focused on heartbreak. Still, I could still feel the pain through her words. When it got to “rooting,” where she pays homage to her mother and her immigration experience, that’s when I began to feel like her stories were my stories. There were times I’d have to put the book down for a second because the words resonated with me and expressed emotions I didn’t even know how to comprehend. Then, “rising” and “blooming” close out the book on a loving and empowering note. It takes you on a roller coaster of emotions from start to finish. If you were a fan of Milk and Honey, definitely check out The Sun and Her Flowers.

Ruby Ibarra is a Filipina American songwriter, rapper, and all-around artist. I discovered her through a spoken word video called Hate a couple years back, and I fell in love with her work. She recently came out with her debut album called Circa 91, which focuses heavily on the Filipino American immigrant experience. From the first song, the record explores colorism, bi-cultural alienation, language, and many other topics familiar to the FilAm community. It’s so refreshing and heart-warming to listen to songs that speak to my experiences, because it’s something I thought I’d never be able to experience.

By far my favorite track is US (feat. Rocky Rivera, Klassy and Faith Santilla). Faith’s spoken word gives me chills every time.

Stream Circa 91 on Spotify or buy it on iTunes.

I’ve never been a big fan of straight-up coffee — I like my Starbucks drinks sweet and creamy — but my mom introduced me to dark chocolate covered espresso beans and I can’t stop eating them! The sweetness of the chocolate with the bitterness of the bean balance each other out nicely, and it provides a little pick-me-up during the day without actually downing a cup of coffee. I’ve seen them near the check out lines at Trader Joe’s, but I prefer to buy them in bulk at Sprouts and you can probably find them at most grocery stores.

As the weather cools down, I love to warm up by burning some candles. I wait all year to stock up on Bath & Body Works’ seasonal candles, so of course I had to give them a shout out. Some of my favorite scents are Sweater Weather (Fresh Sage, Juniper Berry, Aromatic Eucalyptus, Fresh Woods), Leaves (Crisp Red Apple, Golden Nectar, Warm Clove Spice), and Autumn (Bright Red Gala Apple, Juicy Fig, Eucalyptus Leaf, Fir Balsam). They’re all fresh and natural scents that are perfect to get you into the Autumn mood. B&BW candles are pretty price, though, so I’ll pick up $3-5 candles from Walmart or Target from time to time. I’m burning a Better Homes & Gardens Candied Caramel Pecan candle from Walmart and it smells like Thanksgiving (to me, at least). 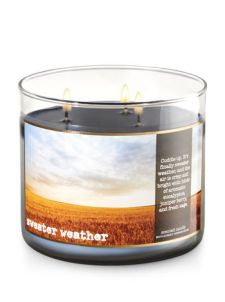 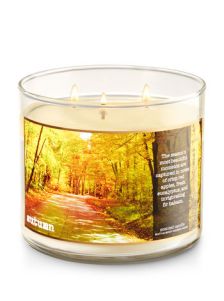 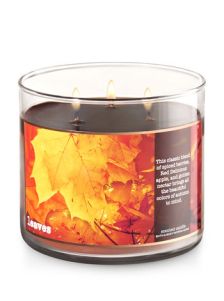 What are your favorites for the month of October? Leave them in the comments below!

One thought on “October 2017 Favorites”